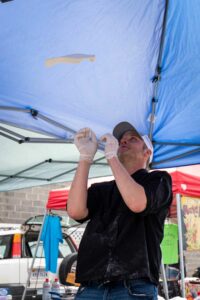 Chef Charles was a great addition to our Grand Opening.  He started the morning with variations on omelets.  Eggs are a great source of protein and omelets are tasty and fast for breakfast, lunch or dinner. Since we are located in  the Southwest- okay southwestern tip of Virginia…Charles started with his take on a southwestern omelet.  He browned chorizo from Pig Feathers Farm and removed it from the pan.  Then he lightly sauted onion, red peppers, and shiitake mushrooms from Baywood Forest.  Those were added to the pork.   He wiped out the pan, added equal parts olive oil and butter and heated until quite hot. Eggs were beaten until light and fluffy and pored into the hot pan and allowed to set up. Chef shook the egg free, flipped it over, added the pork mixture and some chopped tomatoes, and folded the egg over the filling.   The next omelet was vegetarian  featuring sauteed kale, arugula and red peppers. Those were removed and eggs were cooked as above, the greens,a sprinkling of chopped tomatoes and grated mozzarella were added, the omelet was folded a served.

Pizza was the next item on the menu.  Charles brought dough he had prepped the night before.  A cool, slow rise adds flavor to the dough.  The first pizza featured ground lamb sauted in mint jelly, thinned with water and a splash of balsamic vinegar.  Finely sliced kale, spinach and garlic chives and homemade tomato sauce topped with cheese were the other ingredients.  Chef cooked it in a large skillet and browned the top with a propane torch.  You can use a grill or an oven as well.  The 2nd pizza was a meatlovers with ground lamb and chorizo, tomato sauce and a balsamic vinegar reduction.